A world-class female sailor is helping “turn the tide” on plastic, promoting a ground-breaking study designed to track pollution in oceans across the globe.

With numerous racing titles and thousands of sailing hours under her belt, Liz Wardley has visited some of the most remote waters on earth.

The 39-year-old was shocked at the discovery of microplastics in these isolated locations during the Volvo Ocean Race in 2017-2018 onboard the yacht aptly named Turn the Tide on Plastic.

Ms Wardley took part in the study to highlight the massive issue of plastic pollution in the ocean – and then encourage everyone to take responsibility for dealing with the problem.

The pollution was detected by a plastics analyser onboard Ms Wardley’s vessel, itself sponsored by the UN Environment’s Clean Seas initiative.

“The scary part is we found microplastics in the Southern Ocean – it’s the first time anyone has been down there with one of these machines so that was pretty ground-breaking,” said Ms Wardley.

“We sailed in some very very remote places; a lot of the shipping routes do not go there. We were literally changing filters every 48 hours to trap microplastics,” she said.

The tiny analyser machine worked by sucking in water to trap the microplastics and provided raw data scientists could then use as reference information.

“We had to try and not contact any other plastic or touch it with our hands so as not to corrupt the data for the scientists,” said Ms Wardley.

The Volvo Ocean Race saw seven teams race 45,000 nautical miles around the world over eight months in a gruelling competition that aimed to raise awareness of sustainability issues.

“It was a very sad note for the race when only two filters from around the whole world race did not contain plastic – one was in the deep south of Australia and the other up near Ireland,” said Ms Wardley.

“To put it in perspective one of the data collections was at Point Nemo (the most remote location on earth) and at that point we were closer to the space station than we were to any humanity on earth – so for there to be plastic there, that was devastating,” she said.

“What’s also devastating is when you’re sailing in pristine waters and you see plastic floating past the boat.”

Ms Wardley, who has become an acknowledged expert on the Volvo Ocean 65 mono hull race yacht and skippered her own yacht in the Sydney to Hobart at age 19, wants to spread her sustainability message through her sport.

“My message would be to reduce, reuse, recycle, or simply refuse,” said Ms Wardley.

“After a 30-minute walk along the beach in NSW recently the first thing I found was a plastic bag, so then I had something to put the plastic in that I found. If we do a little bit it will help,” she said.

“I want everyone who goes to the beach to not litter, but also actively collect rubbish, especially plastics and dispose of them.”

“Imagine if everyone on the planet had that idea – I believe the problem could be fixed quickly.”

“It’s not good enough to only blame governments or big business. We all have a role to play.” 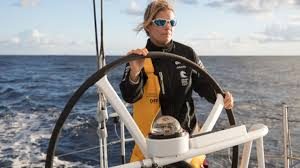 “It doesn’t take much time to make a massive impact on the environment.”

Liz has competed in three Volvo Ocean Races; the next race is in 2021.

From bedtime lullabies to recording an album ...

How Becoming a Mum Saved My Business