How Medical Trials Can Earn You Big Bucks

There’s a unique way some enterprising people are earning thousands of dollars extra cash, while at the same time helping with potential medical breakthroughs.

Stephen Hughes d’Aeth is one such person – offering himself up for human medical testing.

He regularly visits the Linear Clinical Research facility in Perth, which most people don’t even know exists – and he earns big dollars doing it.

Mr d’Aeth has participated in more than 20 clinical studies into drugs for ailments including Ross River virus, heart problems and arthritis.

The 33-year-old from High Wycombe said last year he made about $9000 from being a human test patient.

“It’s easy money and it’s tax free. I have enjoyed a holiday in Bali thanks to the trials and this will cover the costs of my next trip away,” said Mr Hughes d’Aeth.

“The only real side-effects I’ve had was slight headaches and a bit of vomiting on one study,” he said.

“Once someone’s evaluated the safety of a potential new therapy or drug through animal studies, they get to a point where they need to test that in a human, and that’s the kind of study that we do,” said Dr Winlo.

“Without healthy volunteers, we wouldn’t be able to conduct the trials which often lead to life saving treatments – helping millions of people worldwide,” he said.

Once a drug has been ticked off by an accredited ethics committee, Linear works out what a drug’s safe-dosing range is. 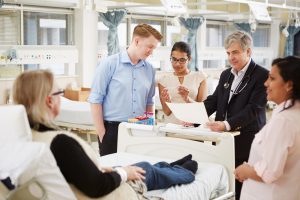 It is set up like a hospital ward and run by doctors and nurses.

“At any one time we have 30 ongoing trials here at Linear Clinical Research in Perth.  Our phase one trials with healthy volunteers are already at an advanced stage and are deemed safe by the Australian Ethics Committee,” said Dr Winlo.

“By getting involved, you are helping with major scientific breakthroughs, what’s more there’s a substantial payment, around $3,000 for a three week stay.”

Once a trial is finished, there’s still a lengthy process before a drug gets to market.

In eight years  of operation Linear has helped create a drug to treat lung cancer, another for knee arthritis, even one for HIV.

“We’re the only one in Western Australia, we’re one of five in all of Australia, and one of only a handful really around the world,” said Dr Winlo.