A simple compliment led Kate down a path she never would have expected.

After commenting that she liked the shoes the child of a friend of hers was wearing, Kate’s friend mentioned that she had got the shoes from a ‘Buy Nothing’ group.

Kate had never heard of “Buy Nothing’, so she did some investigation.

She found out that Buy Nothing is a concept where people join communities in which you – as you’d expect – buy nothing, instead focusing on sharing the possessions we already have with those who need them and being shared with in return. Imagine Facebook Marketplace or Gumtree, but all free – and all local.

She’s now an administrator of the Swanbourne group for this growing movement.

“Buy Nothing is a hyper-localised gift economy,” she explains. “You can only join one group, and that’s the area in which you live.”

There are over 130 groups in WA and ther

And the groups can come in handy at the most unexpected times.

“For example, my daughter was about to start three weeks of Minkey trials (modified field hockey for children),” said Kate. “So I realised I’d have to buy shin guards, mouth guards, hockey sticks and everything.”

“I popped it up on my Buy Nothing group – does anyone have any shin guards that we could have or borrow – and I got a pair.”

“I popped round the corner, picked them up – sorted.”

There are three types of posts that are encouraged within a Buy Nothing group – to gift or offer things you no longer need, to make a request for an item or service, and gratitude posts to thank people for their help.

For Kate, it’s been less about the things she’s been able to gift and receive and more about the relationships she’s fostered in her community.

e’s new ones popping up all the time – WA is the fastest-growing region in the world.

“You actually get to know the people in your group as people, not just a name on a screen.”

“I have had some beautiful interactions with people – for example, we had a cold in our house so someone cycled around with a bag full of lemons for the household.” 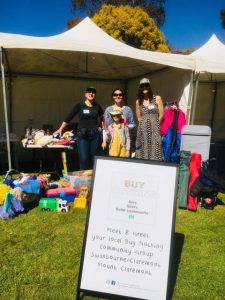 “We all have an abundance around us already, but not everyone has the same things in abundance,” says Kate. “But amongst our community we do have enough, if we share, to help each other.”

You can find out more about the project at the Buy Nothing Project Facebook page.