From Humble Beginnings to Huge Success

A Perth husband and wife have worked their way to the top of Australia’s competitive beauty market, creating a multi-million-dollar eyebrow shaping business from scratch.

Rizwan and Sandrine Syed know all about the challenges faced when trying to start a business in a city with no professional networks, no credit history and an idea few people are familiar with.

That’s what the couple was confronted with in 2008 when they set out to launch their eyebrow threading business, having moved to Perth from India and France.

Before establishing Zubias Threading, Mr Syed said as far as he was aware the traditional Indian hair removal process was not available in Australia.

But the Syeds persevered, despite having few connections, little knowledge of the local business culture, and a growing pile of rejections from landlords, banks, and insurers. 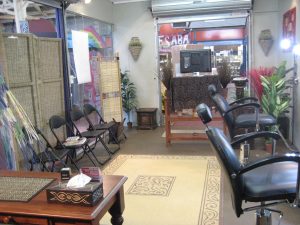 They eventually secured an insurer after a local Chinese businessperson rented them a tight pathway space along Fremantle’s E-Shed market.

So, with just $5,000, Mr and Mrs Syed opened the first Zubias Threading outlet.

Today, they own 30 stores across Perth with plans to expand into Melbourne and Sydney.

“Our loyal customers, either myself or my wife had to teach and show each and every one of them what we do, and once we built their trust and confidence, that’s when they became our advocates,” Mr Syed said.

Zubias now has ten franchise outlets, all run by long-serving staff in the business.

“From virtually nothing, we now employ 150 staff who are mostly migrants… they are already so grateful to be here,” Mr Syed said.

The kindness and compassion demonstrated towards all Zubias employees has led to a high retention rate, and their satisfaction is evidenced in customers.

Mr Syed’s business acumen started to emerge during his childhood years in native India; his father was a farmer-turned-businessman – but it was his five sisters who had the flare for beauty.

“That’s a lot of sisters, and that’s a lot of beauty treatments that go around in the house, and certainly threading was one of those,” Mr Syed said.

“I grew up having hair pulled off my hand while I was sleeping because my sisters thought it was funny. I grew up with these techniques and I knew them very well.”

Mr Syed had a dream to move to Australia, and he did so in 2003 to study his Masters in Information Systems in Adelaide.

But IT wasn’t Mr Syed’s passion, so he started to explore potential business options with his future wife, who had a successful position teaching French at a language school. 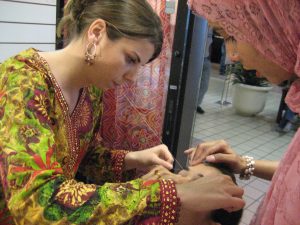 Mr Syed’s sister suggested he start an eyebrow threading business like her own in the United States. The couple visited her, to learn the technique.

“In India a man doing threading would be frowned upon big time, so I was observing, my sister was teaching Sandrine,” Mr Syed said.

“We grew the skills ourselves on real people, and then we realised we had a special way of doing the eyebrows which no other country does. Which is why we are unique in what we do, and we train our staff to do it our way.”

Empowering Smart Women to be Smarter with ...