Good News
Home›Good News›From bedtime lullabies to recording an album together – the mother and son sharing their love of music with other families.

From bedtime lullabies to recording an album together – the mother and son sharing their love of music with other families.

Singing to her son when he was a baby, Victoria Hamilton never imagined that one day they would team up to record an album of lullabies for a new generation of little ones.

Victoria is a gifted singer-songwriter who has been writing and performing since she was a child, while her son is a talented composer studying music.

Together, they are working on her first album, “New Renaissance Lullabies”. 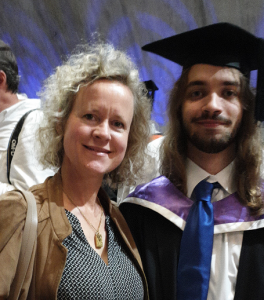 “I was always playing lullabies to my two boys when they were young,” Ms Hamilton said.

“We had a cassette tape of songs, but when I couldn’t play that I would just sing to them, she said.

“My songs are designed purely for healing and upliftment.

“I get my inspiration from beauty: beautiful sunsets, nature, animals, music and people. ‘Beauty’, as in the feeling that accompanies any experience that makes you resonate with that perception of beauty.

“There’s a source of inspiration around every corner… so long as one is open to everyday magic: a blossoming flower; a baby laughing; or the way light plays on the water.”

Victoria believes music is central to our existence and it has incredible healing powers.

“From age-old hymns and chants to singing bowls and laughter yoga, music shows the way to an enlightened state of being. It reminds us of our divinity.”

She has written 12 original lullabies for the new album and is ready to record them with her son.

If her previous success is anything to go by, the album will be a hit.

“In 2014, I was notified that I was a finalist in the Great American Song Contest,” she explained.

Before her children were born, Victoria worked six nights a week at a 5-star beach resort in Turkey, singing poolside as part of a small band.

“When our yacht charter business took off and I became a mother, I could not spare any more time for the singing job.

“I imagined that that would be the end of my performing.”

More than 20 years later, Victoria was back on stage in Sydney earlier this year performing some of her own songs to a group of more than 170 women.

“When I handed the microphone back, some of the mothers gathered and asked whether I had an album that they could purchase. I was happy to say there is one in the pipeline,” Ms Hamilton said.

“The album is slow in coming, but I’m happy to say it is coming!”

The Hottest Wheels In Town