For one week in January, some of WA’s musically inclined youth were finding their inner Tina Turners and Joni Mitchells.

Girls Rock! Is a program that’s designed to use music as a way to empower young girls, trans and nonbinary kids to feel at home within the music industry and discover some personal confidence in their daily lives.

During the week-long day camp, attendees have the opportunity to learn more about their chosen instrument, join bands with the other campers and perform at a showcase concert at the end of the week.

Em Burrows, the Audience Development Officer at West Australian Music, was familiar with the concept after it originated in Oregon in 2001 and lobbied to bring the opportunity to the youth of Perth for the first time.

“We have a number of programs designed to address the gender imbalance in the music industry, but this was a really good grassroots way to go about it,” she said.

“We think when you supply a safe, inclusive space where young people have the opportunity to try new things and meet like-minded people, it can be really powerful.” 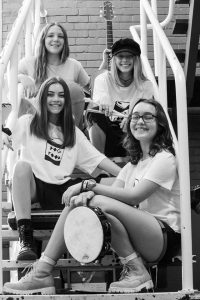 The week-long experience included workshops with women from the local music industry, who also took it upon themselves to mentor the bands as they prepared for their end-of-week gig.

Ms Burrows said that the benefits of the camp were many, varied and immediate.

“Apart from everything else, the best part of it was simply that it was an unbelievably fun and joyful experience,” she said.

“But on top of that, we saw so many of the campers increase in confidence in such a short period of time – and so many parents commented on that during the showcase performance at the end of the week.”

“They just couldn’t believe the change in their children over just five days.”

During the workshops during the week, the bands that came together were tasked with writing an original song and performing it at the end of the week – and the topics during the January camp ranged from learning to be yourself to the value of friendship.

“Song writing is often considered as something you can either do or you can’t,” says Ms Burrows. “But that’s not actually the case – it’s a learned skill like anything else. These camps are a great place to demystify that whole process – and often once you’ve started, you can’t stop.”

While the January camp has concluded, you can register your interest for the next edition of the camp at girlsrockwa.org.au.

Secrets Revealed On How To Attract Love ...